I have heard many stories of non satisfaction from oral for women, this makes me extremely sad.While giving if you read the receiver you can figure out what is good, what is better and what she doesn't enjoy.

There is nothing like get the flood of heat, feeling the pulse of her heart in her inner thigh, the throb and twitching around your tongue and the blessing of juice from a woman as she enjoys.

Oral sex can be an early morning wake-up,or it can be a deviant public bathroom activity in the middle of a wedding.

With the proper preparation, it's instantly accessible in almost any situation.

For whatever reason, many women are not conditioned to expect (good) oral sex.

They fully anticipate a guy's cock appear at their lips but would be genuinely floored if the same guy pushed her back on the bed and descended into her wet muff until she came in his face.

Sometimes women even think they don't like it-- because, you know, who would want to be down there? (Case in point, my first girlfriend; I eventually had to hold her down to go down on her.and then she never fought me again.)

But a good tongue job can really make her get pleasure. Just a totally different sexual pleasure.

The simplest, easiest, and most accessible position is what I think of as The Buffet-- wherein the girl lies back, lifts her legs and opens her thighs to reveal the pleasure smorgasbord between her ankles and her clit.

Did I say ankles? Oh yes. And now I think I'll have some inner thighs.

In this position, you (the giver) can easily kiss/lick/caress/stoke/suck any area from her feet to her knees to her labia.

It's a vulnerable position but also egalitarian-- it offers opportunities for power dynamics both ways.

If he's running the show, he puts his left hand firmly on her belly and spreads her inner lips with the other or wraps his arms under her legs so she can thrash but can't go anywhere. (I've even held her by the throat, but then, I have long arms.) If she's taking control, she gets to grab the back of his head, direct his tongue or (my favorite) lock her legs around his neck to squeeze at a crucial point.

I believe my favorite is easily what you refer to as the buffet, the grind again my face as she wriggles in pleasure, the unadulterated desire as she feels it build, then of course the rolling multiple orgasms.

All in all, a fine way of eating pussy, with many positive attributes. The Front Mount is for the slightly more adventurous.

Here, the man (giver) lies back, and the girl straddles his face, facing away from his body.

This is, obviously, a bit more dominant, and some girls feel a bit hesitant to mount their lover without a little encouragement. (I've heard heavier girls say that they worry about crushing someone fear not!)

The key to the front mount (as the giver) is to remember that most girls still want to be teased into climax which means take your time and don't attack the clit.

Circle around and around until she irresistibly wants you and directs you there.

There are three delightful variations to the Front Mount, each offering something different.

In the squatting position (usually over a hard surface like a floor-- sometimes with heels), the girl can directly control the space or pressure she's getting-- lifting up to encourage light tickles or bearing down to achieve a thick bit of tongue between her folds.

In the sitting position (legs folded back-- typically on a bed), the girl gets to relax more but can still adjust weight and intensity by leaning forward or back. (Here I'm imagining a girl who has lost all decorum and moved to sit fully upright, twisting her nipples as she comes.)

The Front Mount is great, but you're also asking the girl to tense her muscles to keep upright and control her bearing.

So, the solution is a specially engineered stool or chair that allows her to poise her wet pussy above your face while also relaxing all her muscles as you work her toward oblivion.

This requires more thought and investment but can work wonders. There's a subtle psychological release that goes with "Oh, I don't have to perform, I can just sit back and enjoy this." If you want to complete the scene, bring her a nice Pinot Noir to sip on and maybe put something nice on TV. 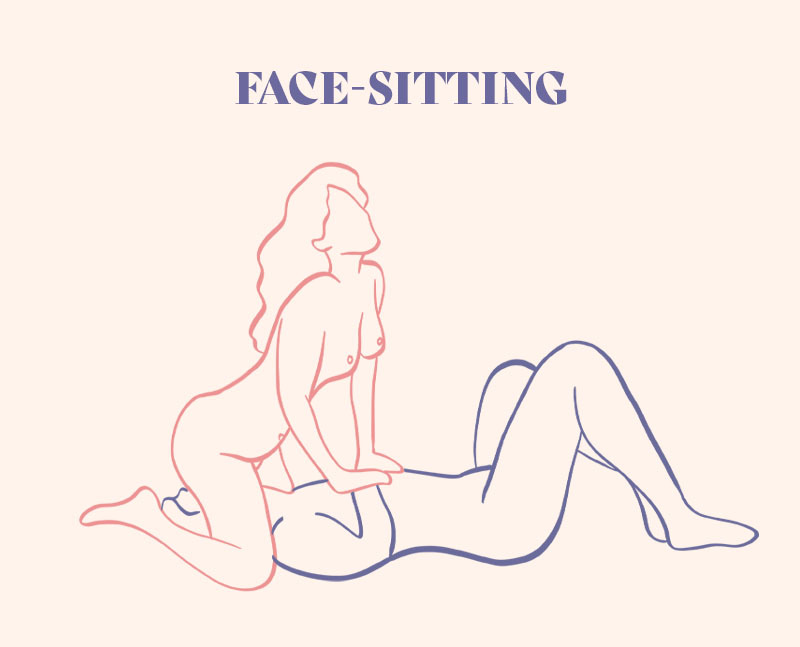 The Reverse Mount-- girl facing the giver's toes, ass planted on giver's face-- is less dominant but offers a level of intimacy not achieved in the Front Mount.

With the Reverse Mount, you can stimulate her clit and outer folds while also (if you're careful) using your nose to give her a sense of penetration.

You wouldn't think your nose could offer much, but in my experience, sometimes all a girl needs is a little penetration to clamp down around as she comes.

Get a small pillow to elevate your head a bit, and then, as she sits back, guides her cleft to settle delicately at the end of your nose.

DON'T penetrate her, yet-- that's for her to decide.

Her clit will be naturally situated right at your tongue (so go easy!) but you then can run delicate rings around her nub or administer a strong tongue lashing, as she prefers.

As she gets wetter and hornier, she'll naturally crave that stimulation and (forgetting herself) sit down fully on your face and ride you into the sunset.

There's nothing quite like having a girl lose control and squirt in your mouth as you feel her inner folds contracting against your nose and lip.

You might think we're done.but no! There's one other delightful position worth exploring, especially when out on the town.

It's delightfully seditious and sexy and unavoidably dominant.

I love this one so much because--with minimal investment in a skirt or dress-- you can transform a humdrum afternoon into a hedonistic memory.

Out on a hike? Lean her against a tree and get to work. Bored at an office party? Time to find a spare bathroom. Except for a bit of flush and dampness, you can be back in polite company in seconds with no one the wiser.

I've even had this in plain view of a polite company when a long skirt or retaining wall offers a modicum of privacy. Nothing like waving to the beachgoers as you get your pussy eaten.

There are so many possibilities!  Hope you enjoyed this one.